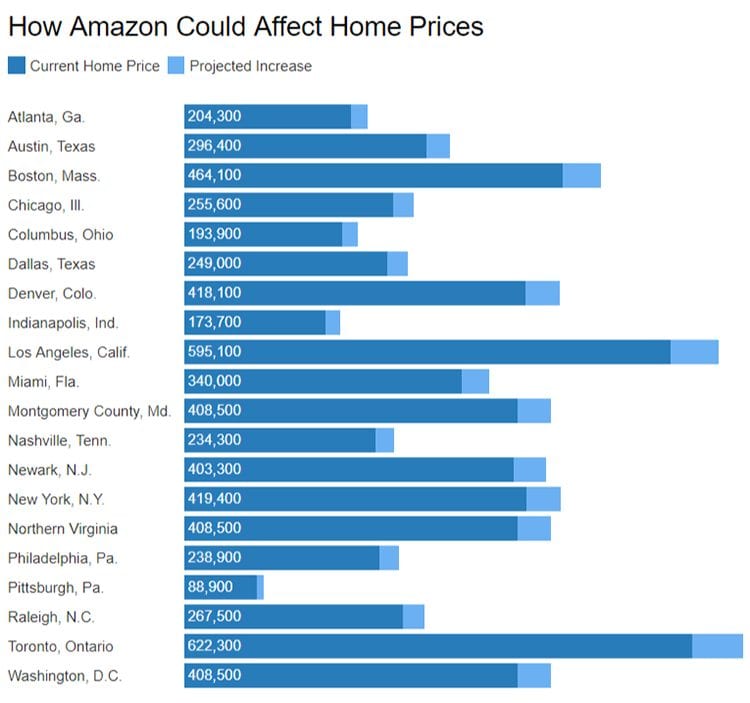 Amazon could single-handedly boost prices in its chosen city

On January 18, the tech and retail giant Amazon announced the 20 cities that are now finalists to host its planned second headquarters (“HQ2”).

After announcing last September that it would build a new HQ in a second city, the company received bids from 238 metropolitan areas across North America.

Amazon estimates that HQ2 will cost $5 billion to construct and operate, and will inject up to 50,000 jobs into the local economy.

Whether Amazon ultimately selects Boston or Atlanta, Nashville or Pittsburgh, the winner will almost certainly see a surge in housing prices, as well as economic growth and tax revenues.

Aside from those who land high-paying jobs at HQ2, the luckiest residents will be current homeowners and those savvy enough to purchase homes and investment property just before – or after – the name of the host city is revealed.

And the biggest losers?

Low-income renters and homeowners who can’t afford any hike in property taxes caused by the spike in real estate values.

How high will prices climb?

How high will home prices rise?

The answer depends on the winning city’s existing supply of housing stock, its ability to expand its suburbs, and the speed and ease with which builders can obtain new building permits, among other factors.

Cities such as Indianapolis and Dallas could more easily absorb added housing demand by constructing new neighborhoods, whereas older towns, like Chicago and New York, would probably have to focus on rehabilitating existing stock.

And it’s likely that new Amazon employees won’t be the only ones searching for homes. If history is any guide, HQ2 will attract other employers to the region.

Apartment List estimates that the 50,000 Amazon workers could lure an additional 66,250 “supplementary” workers.

One way to estimate the likely impact on home prices is to examine what happened in cities that suddenly became home to one or more tech companies like Amazon.

The median price of a single-family home or condo has risen 67 percent since April 2010, when Amazon opened its first headquarters there. In August 2017, the median rent for a one-bedroom climbed to $1,380, and one analysis found that Amazon now occupies 19% of Seattle’s office space, putting upward pressure on commercial rents.

Home prices have soared by 43% since late-2014 after Tesla began construction on a new battery factory according to CNN Money.

Dallas began seeing an influx of new companies in 2008 when AT&T relocated its corporate headquarters there from San Antonio. By 2016, the median home price in the Dallas metro area had climbed by 56% – from $145,800 to $227,100 according to Realtor.com. Nationwide, prices rose by 19.8% over the same period.

According to a 2015 analysis by Redfin of six major U.S. cities, for every 1% increase in the number of technology workers, there was a 0.5% increase in home prices.

As one forecast stated, the city that becomes home to HQ2 can expect an average annual rent increase of up to 2% – on top of any “organic” increases.

Most experts agree that the smaller cities on Amazon’s short list would feel more impact from hosting HQ2 than the largest cities – in terms of both economic growth and housing prices.

While the addition of another 100,000 jobs in a metro area the size of Los Angeles (population: 13.3 million) would represent a mere drop in the Pacific Ocean, the benefits for a city like Columbus, Ohio (metro population: 2 million) could be history-altering.

The impact on home prices would be most profound in cities that have seen only modest growth in real estate prices in recent years. According to some experts, markets that have experienced single-digit appreciation could see prices jump 10% to 20% in the first year alone.

By comparison, a city like Atlanta, which already has a hot housing market, might see home prices increase by “just” an extra 0.7% annually if Amazon located HQ2 there, says myajc.com.

In the short run, those who stand to benefit most from having Amazon as a neighbor are current homeowners and landlords.

Homeowners might see tens of thousands of dollars added to the value of their properties within a few years. Landlords would be able to raise rents significantly as the pool of available rental units shrinks almost overnight.

On the other side of this double-edged sword are house hunters, especially first-time homebuyers, who may suddenly find it difficult to locate affordable properties, as well as renters, who might struggle to keep up with the steep rent increases.

Some buyers and renters might even find themselves pushed out of the area entirely – a trend that’s all-too-familiar to some long-time residents of cities like San Francisco.

In the long run, even established homeowners may experience the flip-side of their town’s newfound prosperity. As real estate prices escalate, so will their property tax bills.

The arrival of new residents will also put more pressure on schools, roads and public transportation. In turn, this will require the city to increase its infrastructure investment, which could further stimulate the need for additional tax revenues.

And if, as expected, the chosen city helps to lure Amazon by offering significant tax breaks and other inducements, the growing tax burden could fall most heavily on current property owners.

Will the benefits of HQ2 outweigh the drawbacks?

It all depends on how much the chosen city gives away to Amazon, and how well it manages the influx of new businesses, jobs and residents.

Amazon is expected to announce the winning city sometime in 2018.

Buy a home in your favorite city

Have an inside track on where Amazon will locate its second headquarters? Apply to buy a home there now, and reap the benefits later.